THAILAND IS UNIQUE in that it’s the most Buddhist nation on Earth, with around 95% of the population identifying as practicing Theravada Buddhists. This fact permeates daily life in a number of ways, from monks walking the streets for collections, to festivals tied to auspicious dates, to, of course, the temples.

There are an estimated 40,000 Buddhist temples in Thailand, official and otherwise. Thai temple architecture, while sharing influences with other Southeast Asian styles, is also unique. Typically comprising a multi-building complex, Thai temples, or wats, feature a tall, bell-shaped stupa, ordination and sermon halls, a space for shrines and Buddha images, and a residence for the monks. Temple roofs are often quite striking, with multiple tiers and gables ending in long, thin ornaments called chofahs.

Many temples are open to tourists — just be sure to dress appropriately (closed-toed shoes, shorts/pants that cover the knee, no bare shoulders) and act respectfully (no hats, sunglasses, smoking, gum chewing, or overly loud talking, and remember to remove your shoes before entering worship areas and to wield your camera thoughtfully). Below are some of the sites you’ll definitely want to check out.

Wat Arun, known as the Temple of Dawn, derives its name from the Hindu god Aruna, personified as the rising sun. Its impressive 230ft (70m) spire is one of Bangkok’s most famous landmarks, especially when lit at night along the Chao Praya River.
Photo: Somphop Nithipaichit

Wat Phu Khao Thong, or Golden Mountain Temple, was built in 1387. The original Burmese-style chedi (stupa) succumbed to time—what you see today is a restoration initiated by King Boromakot with a new chedi in the Thai style constructed on the old one’s base. A 2kg (4.4lb) gold ball sits at the top of the structure.
Photo: Karl Baron 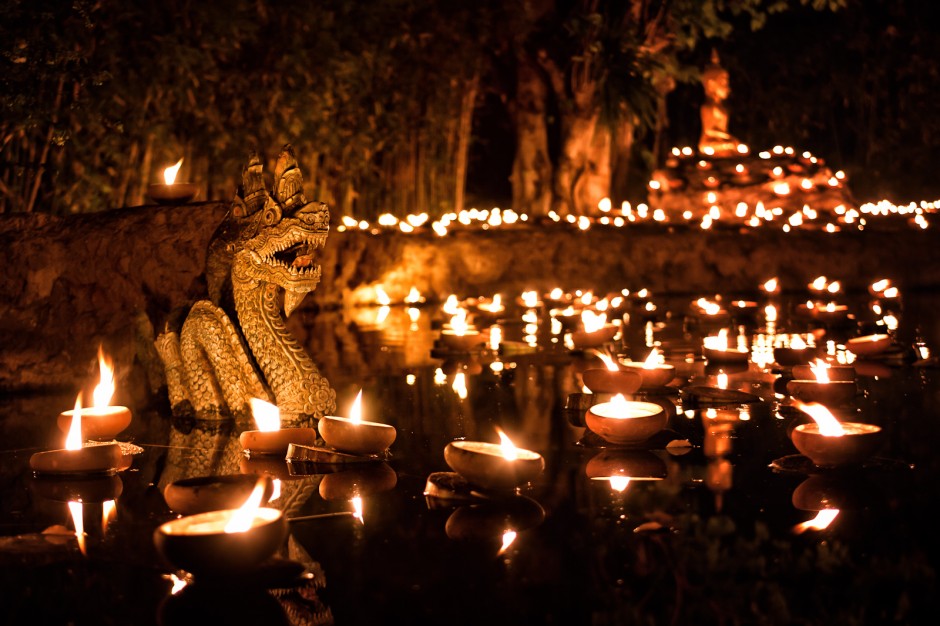 A naga, surrounded by candles, guards a pond in one of the temples in Chiang Mai during the Visakha Bucha holiday. This highly ceremonial annual event sees Thai people make merit by going to temples and engaging in Buddhist activities.
Photo: Author 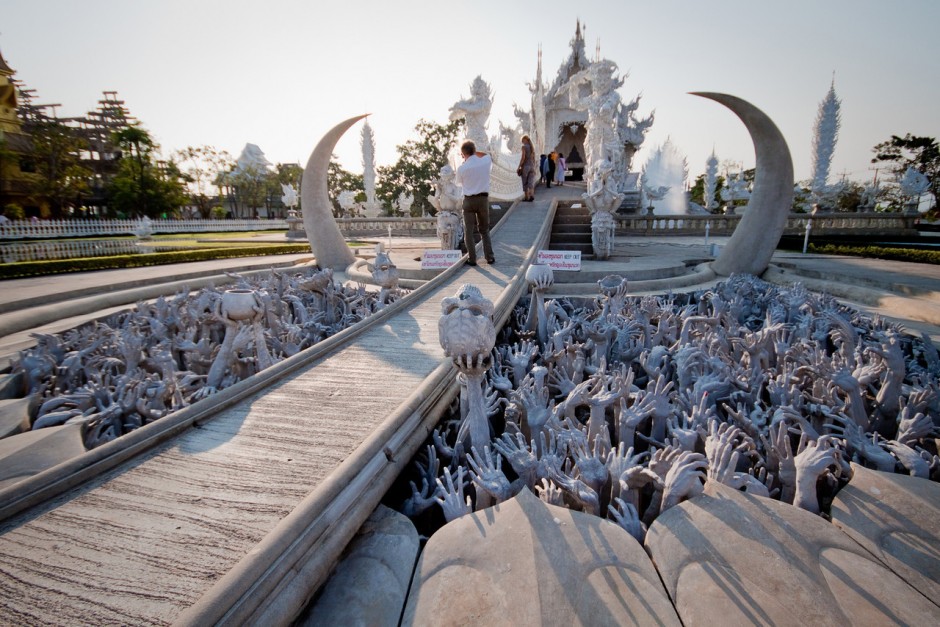 Unlike most Thai temples, Wat Rong Khun, known as the White Temple, is the dream-come-true work of art of Thai painter Chalermchai Kositpipat. Located in Chiang Rai, the whole structure is covered in whitewash and mirror chips and the architecture has been imbued with riddles, teachings, and Buddhist philosophy.
Photo: Author

Though not a temple itself, Bangkok’s Grand Palace complex is an impressive site and does house one of the most important temples in the country, seen below.
Photo: Greg Knapp 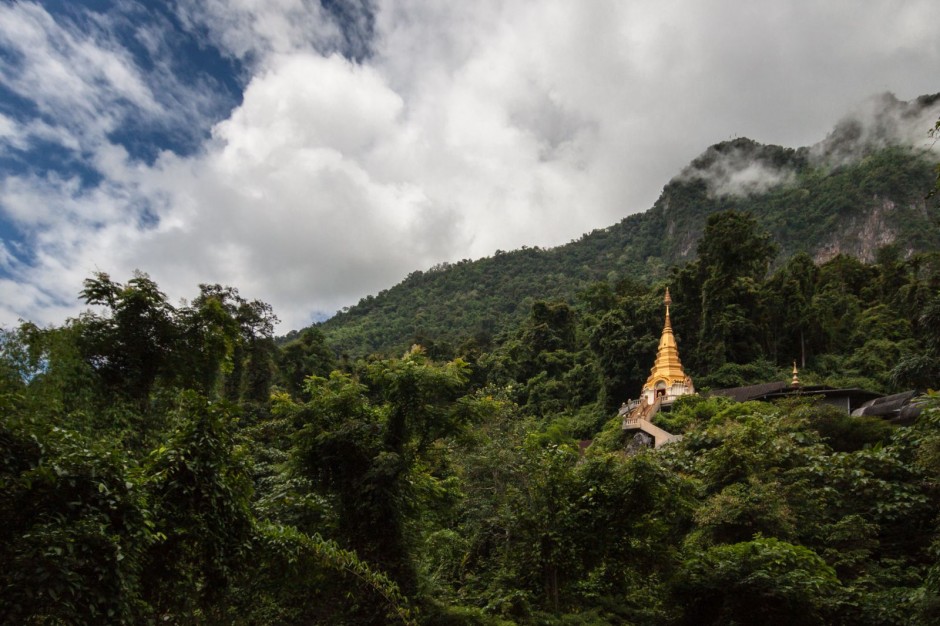 Wat Tham Pha Plong, located in Chiang Dao in Northern Thailand, is a peaceful temple partially carved into a cave. Located on top of a limestone hill, it’s reached by climbing 508 steps, with Buddhist teachings and quotes plastered along the way. It’s a place to relax and meditate with a splendid view over the forest.
Photo: Author

Bangkok’s Wat Suthat is an important royal temple. Construction began in the early 1800s but wasn’t completed until 1847. Find it in the central district of Phra Nakhon.
Photo: Nicolas Lannuzel 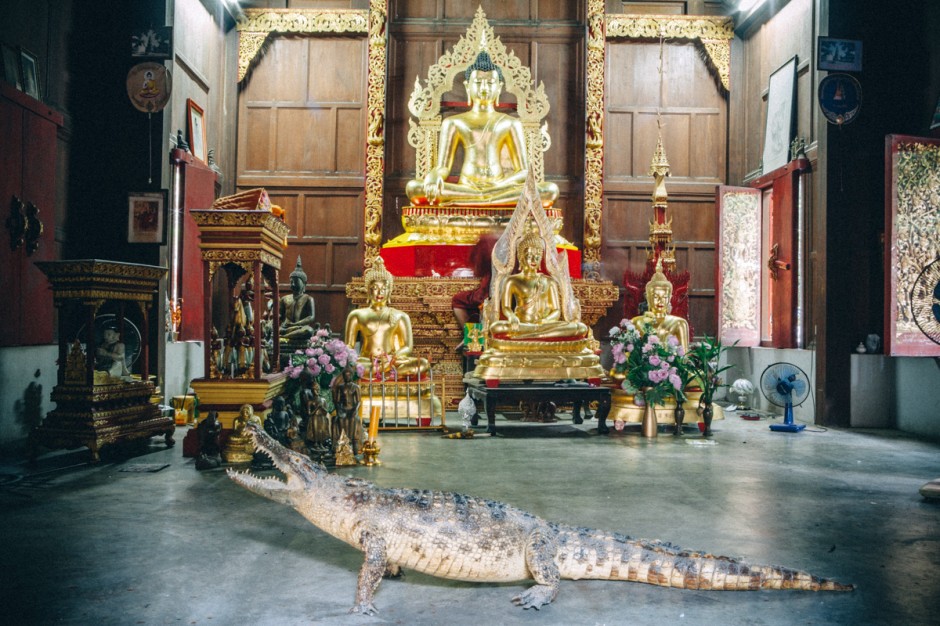 This temple in Chaing Mai features a stuffed crocodile in its main hall along with its Buddha images.
Photo: Scott Sporleder

Wat Pho sits right next to the Grand Palace in central Bangkok. One of the city’s oldest temples, it’s probably best known (and visited) for its 160ft-long reclining Buddha.
Photos: Dennis Jarvis and Carles Tomás Martí 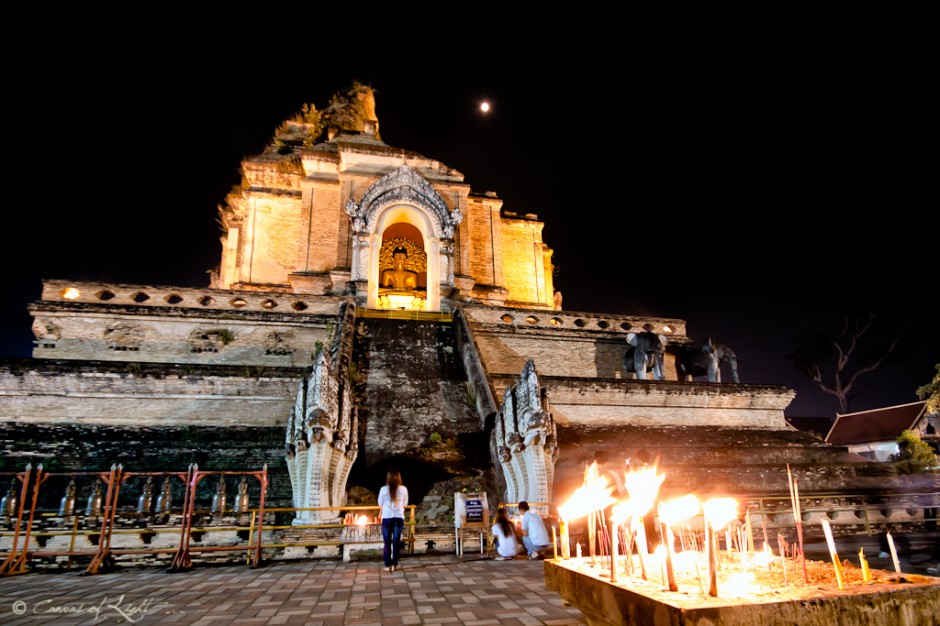 Built in the mid-15th century, the stupa behind Wat Chedi Luang used to be the home of the famous Emerald Buddha. After an earthquake destroyed the upper portion of the structure in 1545, the statue was moved to Bangkok. The stupa stands about 60m tall (~200ft) and is the highest building inside Chiang Mai’s Old City.
Photo: Author

Wat Mahathat is one of the ruins in the Sukhothai Historical Park, site of an ancient Thai kingdom in the north of the country. Total ruins number almost 200, making this an awesome place to visit and explore.
Photo: Andrea Schaffer

The Panturat Temple is a small cave that’s more commonly known as the Monkey Temple or Monkey Cave, thanks to the preponderance of local macaques who are more than happy to pose for pictures in return for a chance to swipe your lunch.
Photo: Kerem Tapani Gültekin 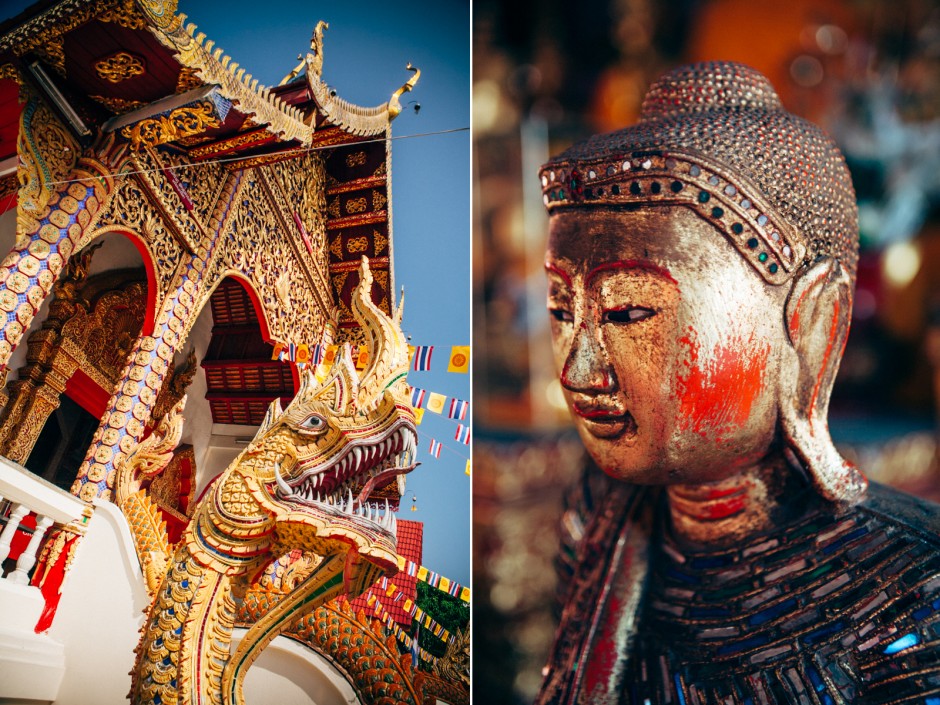 One of Chiang Mai’s 18 or so Buddhist temples, Wat Dokeung is adorned in brilliant colors, statue work, and architectural details.
Photo: Scott Sporleder

Wat Doi Suthep, located on the mountain of the same name, overlooks the city of Chiang Mai and is an important pilgrimage site for Buddhists all over the country. Legend says the location of the temple was decided by a white elephant carrying a relic of Buddha and released into the jungle by King Nu Naone.
Photo: Tevaprapas 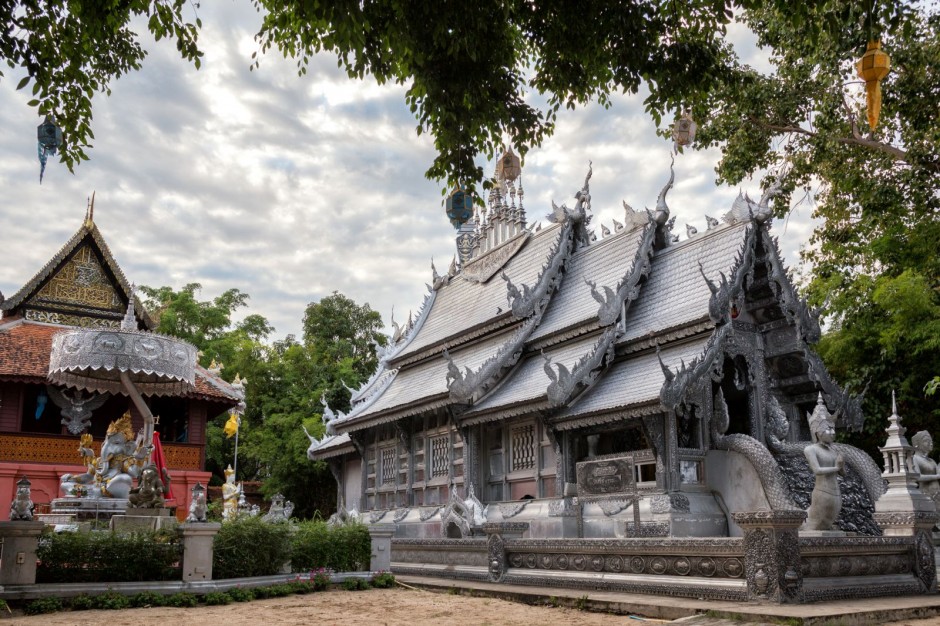 Located near Wualai Street, known as the silversmiths’ district, Wat Sri Suphan stands out from all other temples in Chiang Mai due to its being entirely covered in locally crafted silver panels, both inside and out. The temple also houses a silver-working school to maintain the local silvercrafting industry.
Photo: Author 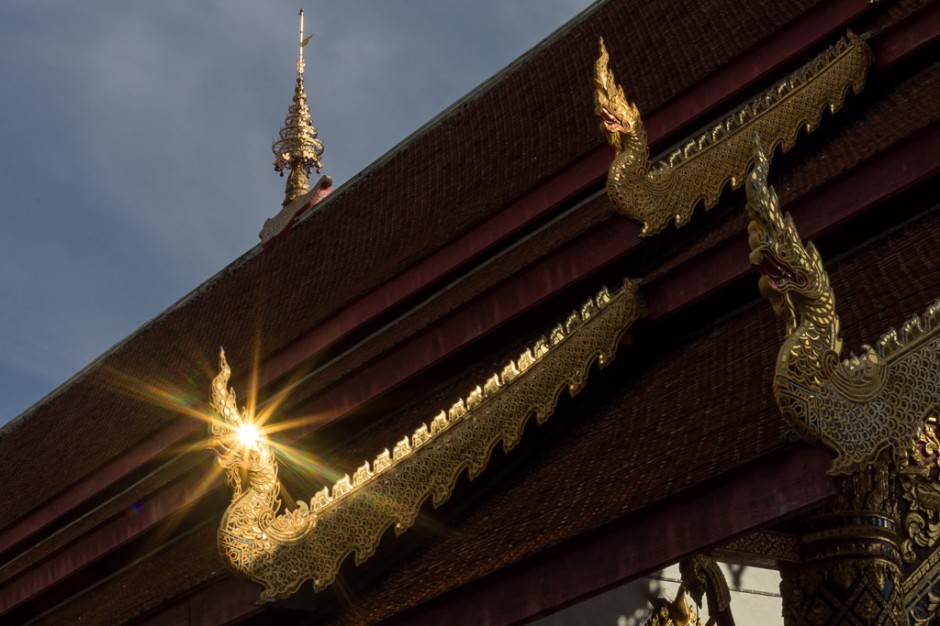 The setting sun reflecting on the eye of a naga sculpture on top of a temple. According to Thai mythology, nagas are cobra-like deities that served Buddha and are given key positions on Buddhist temples, guarding entrances and ornamenting the roofs.
Photo: Author

The Sanctuary of Truth, located by the seashore near Pattaya in Chonburi Province, is a gigantic structure made entirely of wood (no metal nails are used). The whole temple is covered with hand-carved sculptures based on Buddhist and Hindu motifs. The temple is a work in progress and is scheduled to finish in 2025.
Photo: SvenErik1968

Wat Benchamabophit, also known as the Marble Temple, is made of white Carrara marble imported from Italy. The structure is a good example of modern Thai temple architecture mixed with Buddhist motifs and European influences.
Photo: Manoonp

Ayutthaya is the old capital of Thailand and home to the ruins of Wat Chaiwatthanaram, among many other structures. Find it an hour or two upriver from Bangkok.
Photo: เกริกชัย อินทร์ปอ

25. Temple of a Million Bottles

True to its nickname, “Wat Lan Kuad” or “Temple of a Million Bottles” is one of the most unique temples in Thailand, made entirely of glass containers. More than 1.5 million bottles were used to build the temple, as well as a few other buildings such as the crematorium and the toilets. The monks are still accepting bottles to recycle and expand the temple.
Photo: Mark Fischer