A tire is a strong, flexible rubber casing attached to the rim of a wheel. Tires provide a gripping surface for traction and serve as a cushion for the wheels of a moving vehicle. Tires are found on automobile s, trucks, buses, aircraft landing gear, tractors and other farm equipment, industrial vehicles such as forklifts, and common conveyances such as baby carriages, shopping carts, wheel chairs, bicycles, and motorcycles.

Tires for most vehicles are pneumatic; air is held under pressure inside the tire. Until recently, pneumatic tires had an inner tube to hold the air pressure, but now pneumatic tires are designed to form a pressure seal with the rim of the wheel.

Scottish inventor Robert Thomson developed the pneumatic tire with inner tube in 1845, but his design was ahead of its time and attracted little interest. The pneumatic tire was reinvented in the 1880s by another Scotsman, John Boyd Dunlop, and became immediately popular with bicyclists.

Natural rubber is the main raw material used in manufacturing tires, although synthetic rubber is also used. In order to develop the proper characteristics of strength, resiliency, and wear-resistance, however, the rubber must be treated with a variety of chemicals and then heated. American inventor Charles Goodyear discovered the process of strengthening rubber, known as vulcanization or curing, by accident in 1839. He had been experimenting with rubber since 1830 but had been unable to develop a suitable curing process. During an experiment with a mixture of india rubber and sulfur, Goodyear dropped the mixture on a hot stove. A chemical reaction took place and, instead of melting, the rubber-sulfur mixture formed a hard lump. He continued his experiments until he could treat continuous sheets of rubber.

Today, large, efficient factories staffed with skilled workers produce more than 250 million new tires a year. Although automation guides many of the steps in the manufacturing process, skilled workers are still required to assemble the components of a tire.

Rubber is the main raw material used in manufacturing tires, and both natural and synthetic rubber are used. Natural rubber is found as a milky liquid in the bark of the rubber tree, Hevea Brasiliensis. To produce the raw rubber used in tire manufacturing, the liquid latex is mixed with acids that cause the rubber to solidify. Presses squeeze out excess water and form the rubber into sheets, and then the sheets are dried in tall smokehouses, pressed into enormous bales, and shipped to tire factories around the world. Synthetic rubber is produced from the polymers found in crude oil.

The other primary ingredient in tire rubber is carbon black. Carbon black is a fine, soft powder created when crude oil or natural gas is burned with a limited amount of oxygen, causing incomplete combustion and creating a large amount of fine soot. So much carbon black is required for manufacturing tires that rail cars transport it and huge silos store the carbon black at the tire factory until it is needed.

Sulfur and other chemicals are also used in tires. Specific chemicals, when mixed with rubber and then heated, produce specific tire characteristics such as high friction (but low mileage) for a racing tire or high mileage (but lower friction) for a passenger car tire. Some chemicals keep the rubber flexible while it is being shaped into a tire while other chemicals protect the rubber from the ultraviolet radiation in sunshine.

The main features of a passenger car tire are the tread, the body with sidewalls, and the beads. The tread is the raised pattern in contact with the road. The body supports the tread and gives the tire its specific shape. The beads are rubber-covered, metal-wire bundles that hold the tire on the wheel.

Computer systems now play a major role in tire design. Complex analysis software acting on years of test data allows tire engineers to simulate the performance of tread design and other design parameters. The software creates a three-dimensional color image of a possible tire design and calculates the effects of different stresses on the proposed tire design. Computer simulations save money for tire manufacturers because many design limitations can be discovered before a proto-type tire is actually assembled and tested. 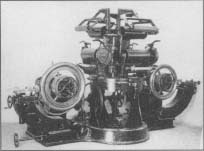 The history of tires provides an excellent example of how innovations in one industry can cause massive changes in another. Simply put, the “take-off” of the automobile industry transformed the rubber industry in the United States during the early years of the twentieth century. The late-nineteenth century rubber industry concentrated on producing footwear and bicycle and carriage tires. By World War I, rubber and automobile tires were virtually synonymous in the public mind. Seven thousand new car sales in 1901 were accompanied by sales of 28,000 tires as original equipment (OE) and an additional 68,000 replacement tires. By 1918, with tires forming about fifty percent of rubber sales, OE tire sales exceeded four million for the one million new cars produced and total tire production reached 24.5 million.

This vast increase in production was accompanied by the emergence of now well-known firms like Goodyear, Goodrich, and Firestone, and the formation of the industry’s center in Akron, Ohio. And while employment soared, production increases were possible only with the aid of technology. The fundamental innovation was the mechanization of core building. Before 1910, tires were built up by workers stretching, cementing, and stitching each ply and the beads around an iron core. In 1909, W. C. State of the Goodyear company patented a machine that carried the plys, beads, and tread on rollers carried on a central turret. The worker pulled the appropriate material over the core while the machine’s electric motor held the proper tension so the worker could finish cementing and stitching. Skill and dexterity remained important, but the core-building machine simplified and sped-up production from six to eight tires per day per worker to twenty to forty a day, depending upon the type.

A passenger car tire is manufactured by wrapping multiple layers of specially formulated rubber around a metal drum in a tire-forming machine. The different components of the tire are carried to the forming machine, where a skilled assembler cuts and positions the strips to form the different parts of the 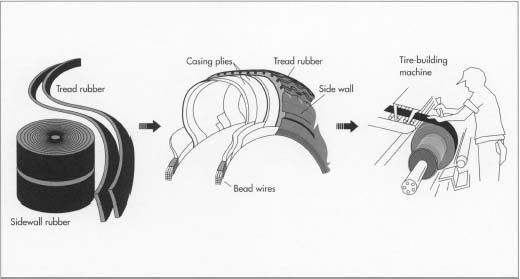 The first step in the tire manufacturing process is the mixing of raw materials—rubber, carbon black, sulfur, and other materials—to form the rubber compound. After the rubber is prepared, it is sent to a tire-building machine, where a worker builds up the rubber layers to form the tire. At this point, the tire is called a “green tire.”

tire, called a “green tire” at this point. When a green tire is finished, the metal drum collapses, allowing the tire assembler to remove the tire. The green tire is then taken to a mold for curing.

Throughout the batch mixing process, samples of the rubber are drawn and tested to confirm different properties such as tensile strength and density. Each tire assembler is responsible for the tire components used. Code numbers and a comprehensive computer record-keeping system allow plant managers to trace batches of rubber and specific tire components.

When a new tire design is being manufactured for the first time, hundreds of tires are taken from the end of the assembly line for destructive testing. Some of the tires, for example, are sliced open to check for air pockets between body plies, while others are pressed down on metal studs to determine puncture resistance. Still other tires are spun rapidly and forced down onto metal drums to test mileage and other performance characteristics.

A variety of nondestructive evaluation techniques are also used in tire quality control. X-ray videography provides a quick and revealing view through a tire. In an X-ray tire test, a tire is selected at random and taken to a radiation booth where it is bombarded with X-rays. A test technician views the X-ray image on a video screen, where tire defects are easily spotted. If a defect shows up, manufacturing engineers review the specific steps of tire component assembly to determine how the flaw was formed.

In addition to internal testing, feedback from consumers and tire dealers is also correlated with the manufacturing process to identify process improvements.

Tire design engineers are also experimenting with non-pneumatic tires that can never go flat because they don’t contain air under pressure. One such non-pneumatic tire is simply one slab of thick plastic attached to the wheel rim. The plastic curves out from the rim to a point where a rubber tread is secured to the plastic for contact with the road. Such a tire offers lower rolling resistance for greater fuel economy and superior handling because of a greater area of contact between tread and road.

Where To Learn More

Mechanics of Pneumatic Tires. U. S. Dept. of Transportation, 1981.